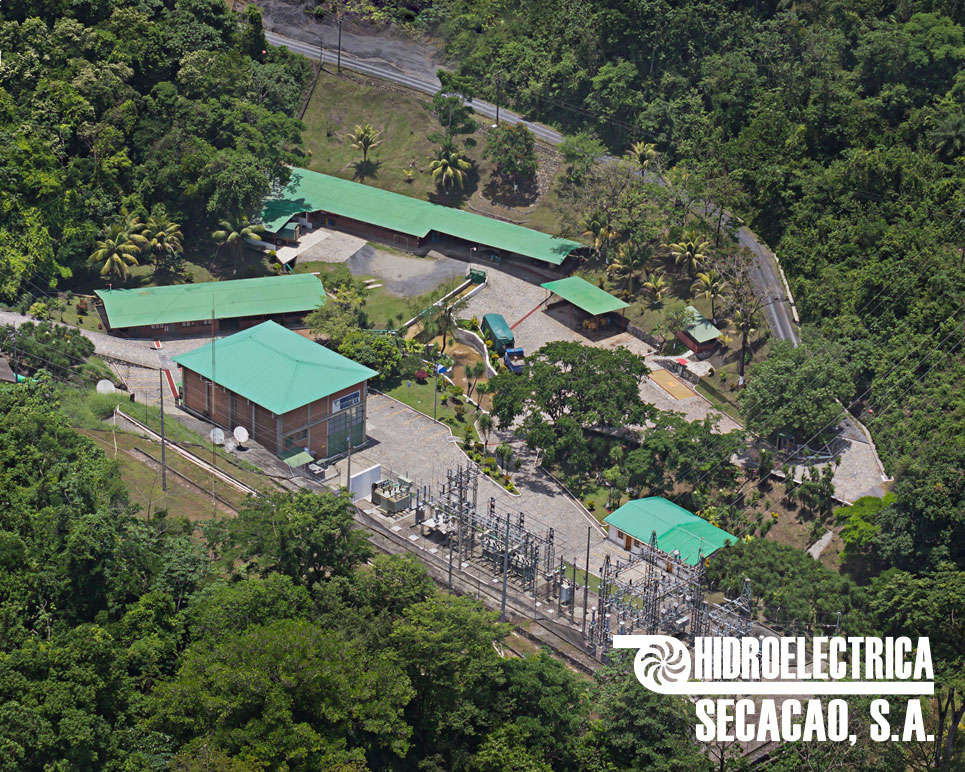 The establishment of Secacao, the Group’s first power station, began in 1993. Its construction was carried out from 1996 to 1998, and commercial operations began in February 1999. The development of Hidroeléctrica Secacao marked the beginning of a successful career in the energy sector for the Group that has brought with it many benefits to the local people and communities.

The plant has an installed capacity of 16.6 MW.

From 1998 to 2005, Hidroeléctrica Secacao’s operations and dispatch of energy to the interconnected National System represented an approximate displacement of 1,138,252 tonnes of carbon dioxide that would have been emitted annually  into the atmosphere in its absence by fossil fuel power stations.

Annually, Hidroeléctrica Secacao’s operations represent between 50,000 and 60,000 tonnes of carbon dioxide that would otherwise have been emitted into the atmosphere by fossil-fuel power stations.

Hidroeléctrica Secacao is registered before the I-REC Standard (an international mechanism that monitors and tracks the Megawatt hours injected into a national grid by a renewable energy power station), generating an estimated 100,000 I-REC’s (International Renewable Energy Credits) annually. 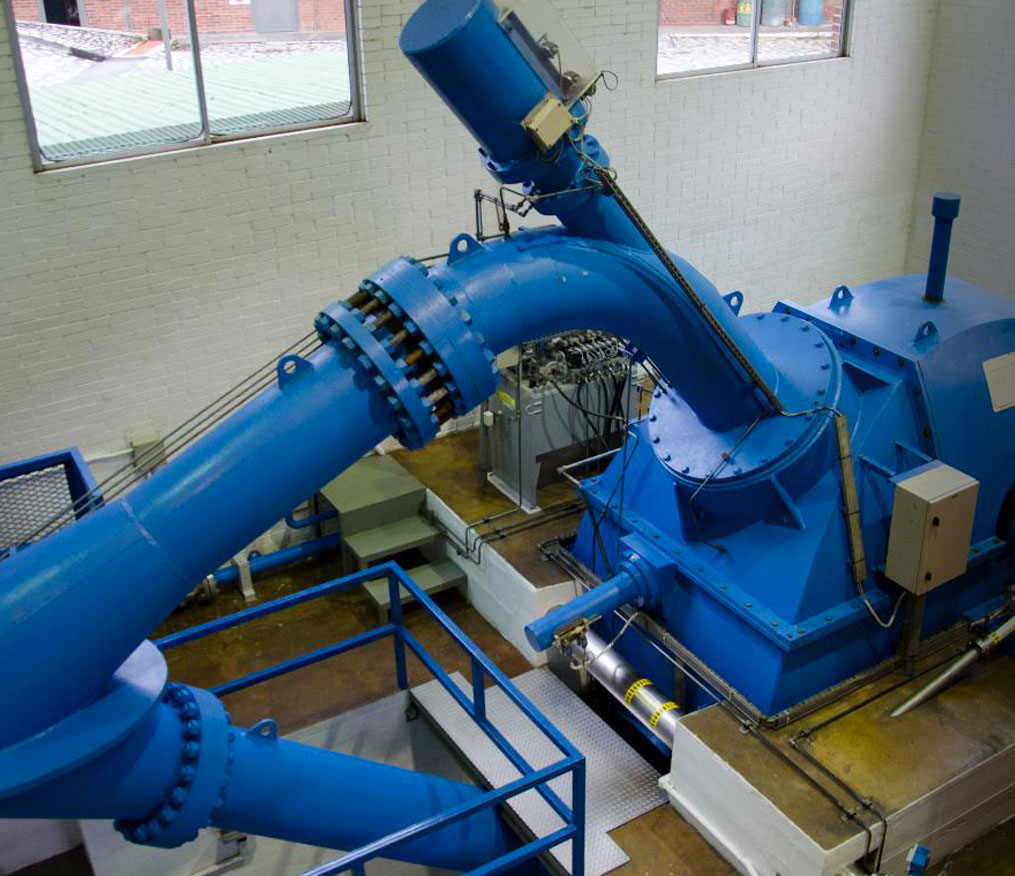 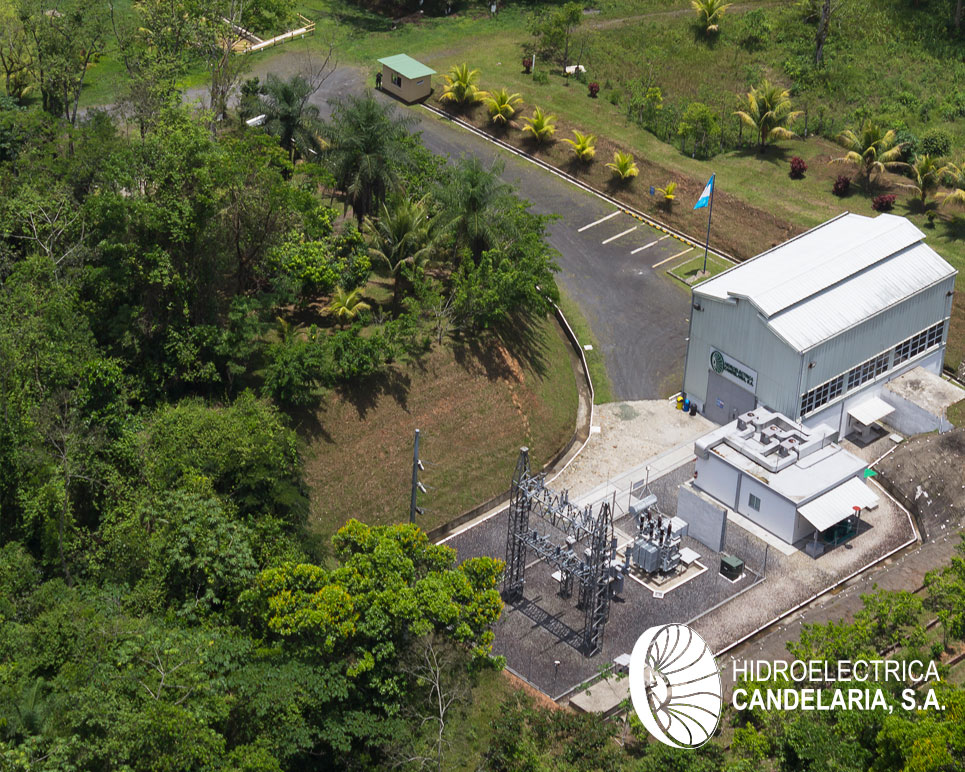 The development of Hidroeléctrica Candelaria took off in December 2004 and concluded in June 2006, while commercial operations opened in July 2006.

Because it is a cascade hydropower plant, it uses the same volume of water as Secacao.

It has an installed capacity of 4.6 MW.

Hidroeléctrica Candelaria was developed under the guidelines of the Clean Development Mechanism (CDM), and it was one of the first Guatemalan projects to be registered under the Executive Board of the United Nations Framework Convention on Climate Change. The station was certified for a total of 120,600 CERs (Certified Emission Reductions), which represent 120,600 tonnes of avoided carbon emissions from 2007 to 2012. It is currently generating 12,500 CERs annually as it undergoes a second accreditation period that will end in 2020.

Hidroeléctrica Candelaria’s CERs are also recognized for their important contribution to sustainable development: the income generated from the sale of the station’s carbon credits has given origin, through Grupo Secacao’s Fundación Trece Aguas, to diverse social development and environmental protection projects in the communities and areas adjacent to the Group’s stations. 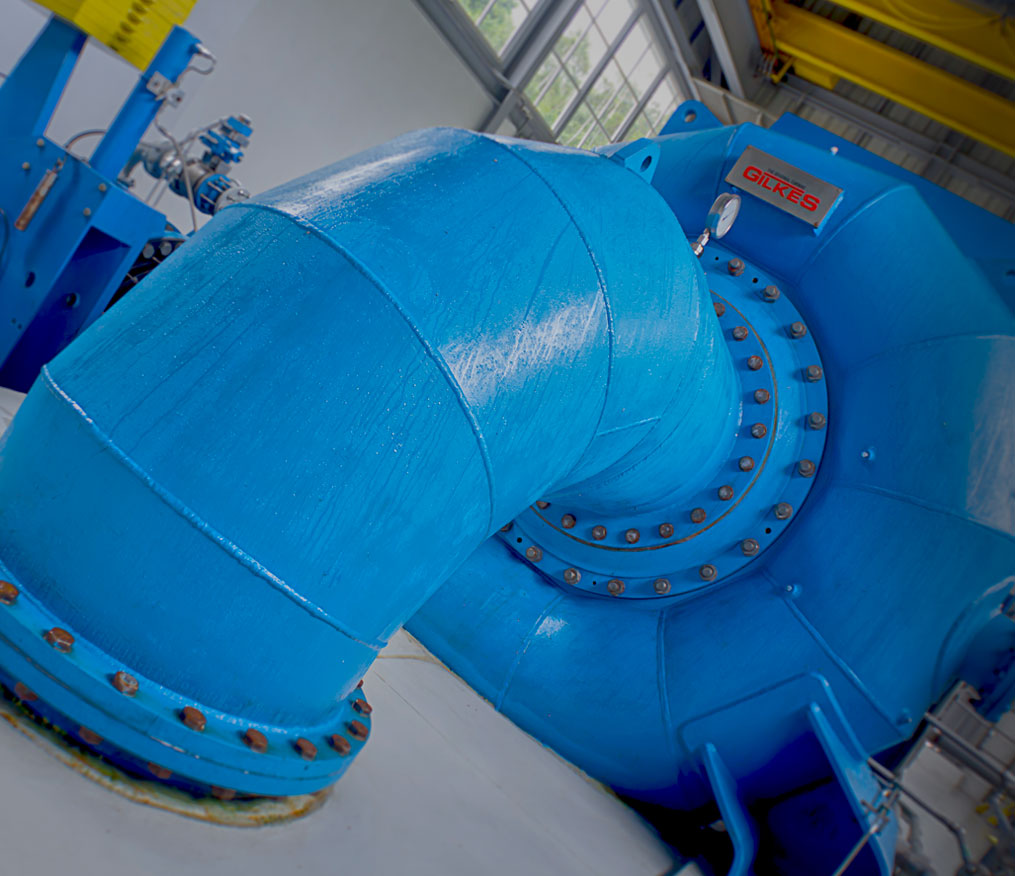 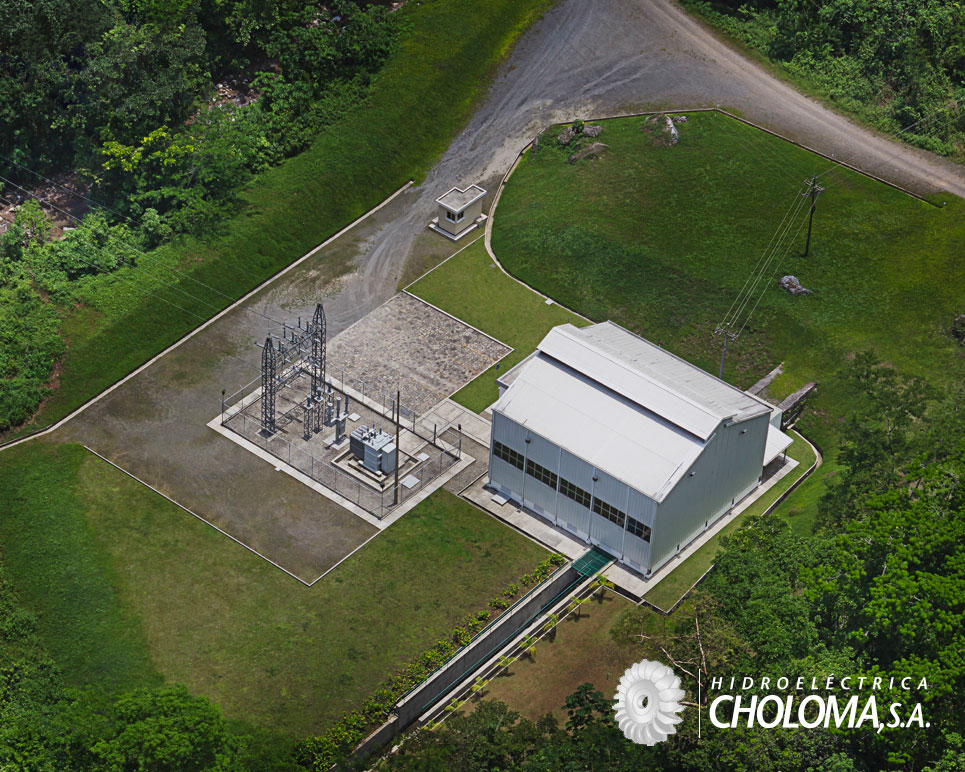 The development of Hidroeléctrica Choloma began in 2009. Construction work was carried out throughout 2011, while operations began towards the end of the year, in a record 11 months, an important achievement for the Group.

It’s a technically complex project despite its small scale, and in 2012 the American Council of Engineering Companies (ACEC) gave the Award for Excellence in Engineering to the Hidroeléctrica Choloma project, as well as to the McMillen firm in the United States.

It has an installed capacity of 9.7 MW.

Just like Hidroeléctrica Candelaria, the Hidroeléctrica Choloma Project was developed under the Clean Development Mechanism guidelines and ultimately registered in 2012 before the Executive Board of the United Nations Framework Convention on Climate Change. It is estimated that Hidroeléctrica Choloma will generate a total of 126,000 tonnes of avoided carbon emissions (126,000 CERs) during its first accreditation period (2013-2018), with an annual estimated total of 18,000 tonnes. The income from the sale of these CERs will allow us to continue community investment and sustainable development projects through the Fundación Trece Aguas. 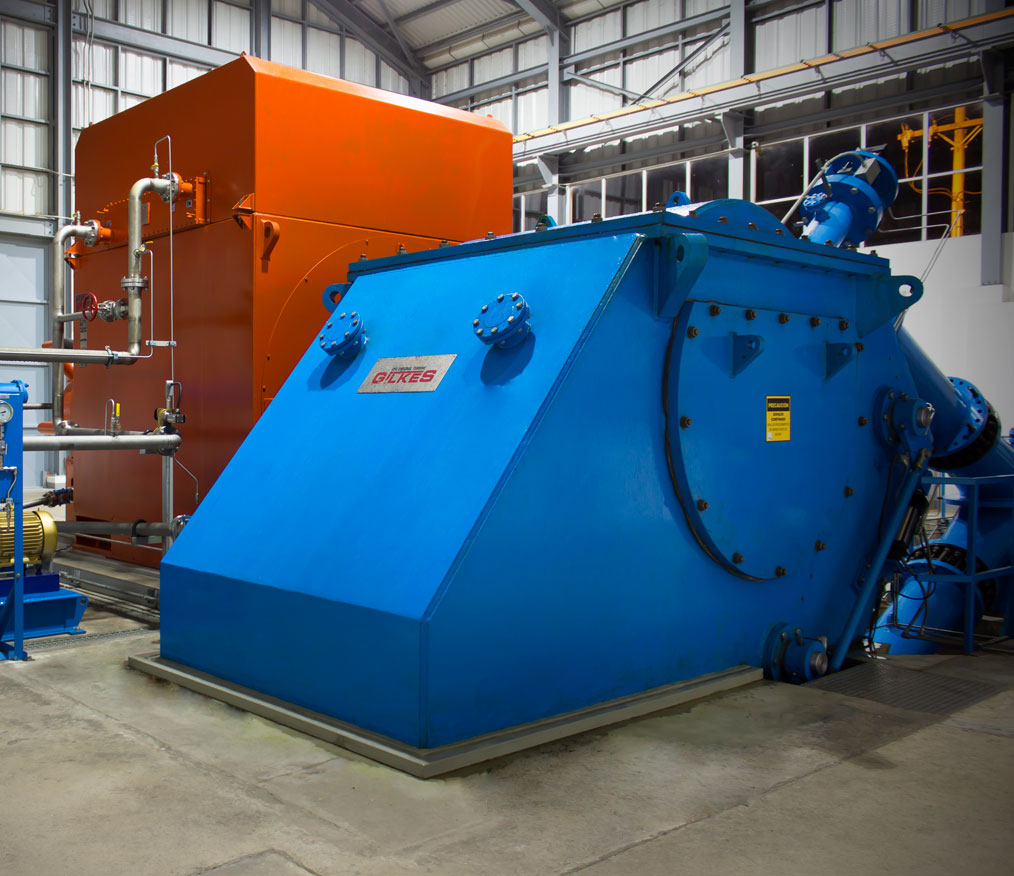 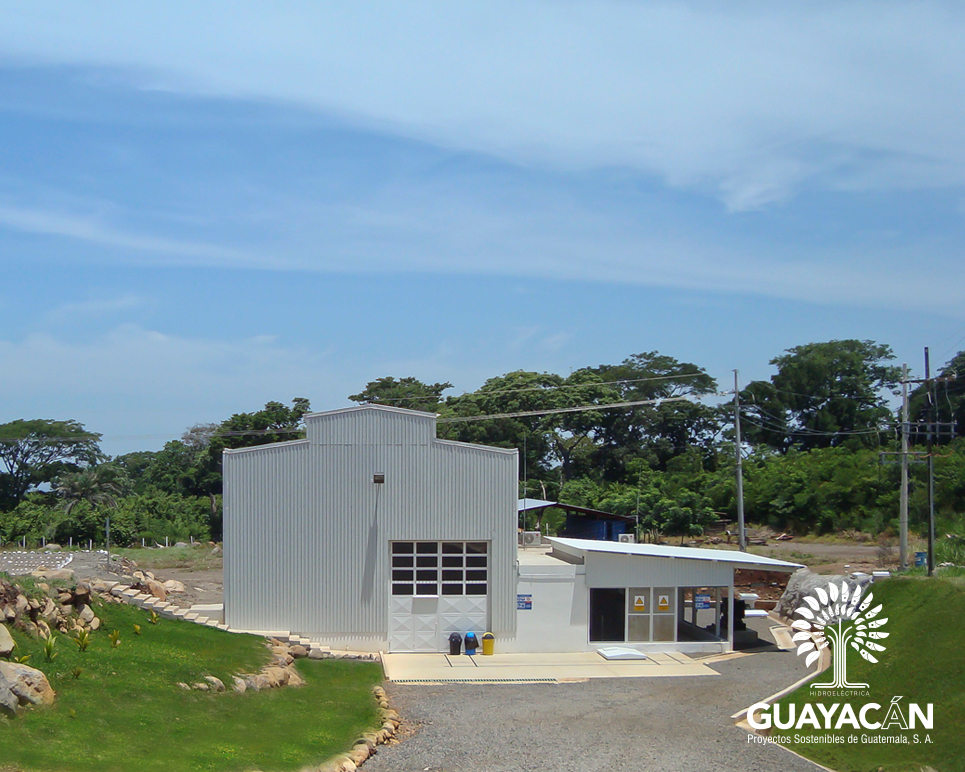 Hidroeléctrica Guayacán is the first distributed generation station developed by Grupo Secacao: as opposed to Secacao, Candelaria and Choloma, this plant isn’t connected to the high-voltage power transmission grid, but instead interconnected directly with the medium-voltage (13.8 kV) distribution grid. These kinds of stations benefit the power grid and its users directly: because they’re located close to the load they serve, they stabilize and improve the voltage of the distribution grid.

It has an installed capacity of 3MW.

Hidroeléctrica Guayacán’s operations and dispatch of energy to the interconnected National System represent an approximate displacement of 3,000 tonnes of carbon dioxide that would be emitted annually into the atmosphere in its absence by fossil fuel power stations.

Hidroeléctrica Guayacán is currently undergoing a registration process before the I-REC Standard (an international mechanism that monitors and tracks the Megawatt hours injected into a national grid by a renewable energy power station), to generate an estimated 6,000 I-REC’s (International Renewable Energy Credits) annually. 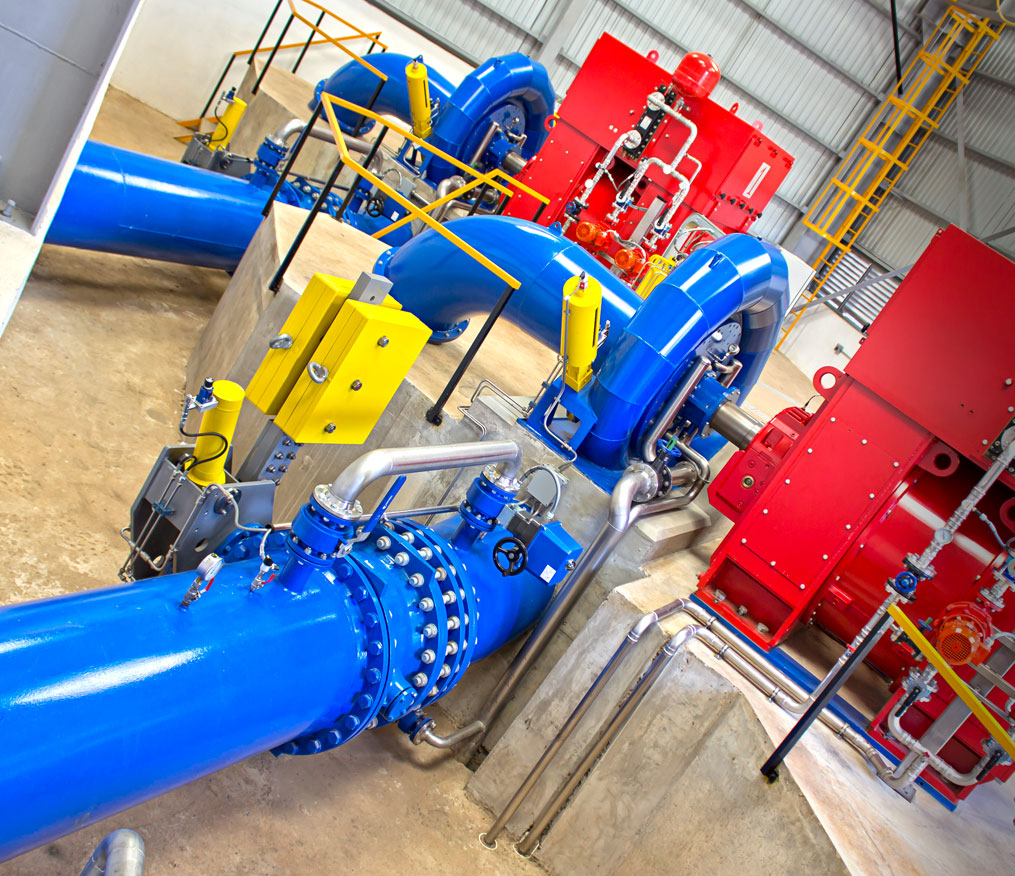 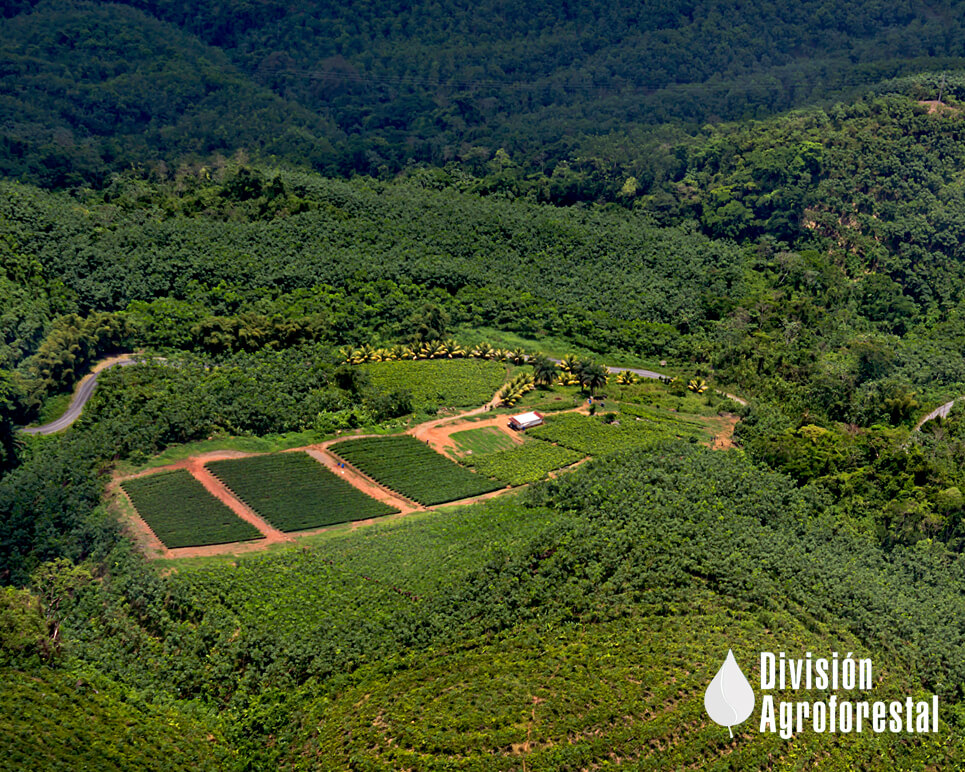 The activities carried out by the Agroforestry Division have their own Environmental License granted by the Ministry of the Environment and Natural Resources (MARN). Additionally, the plantations’ management plans are approved by the National Forestry Institute (INAB), national governing body for forest matters. 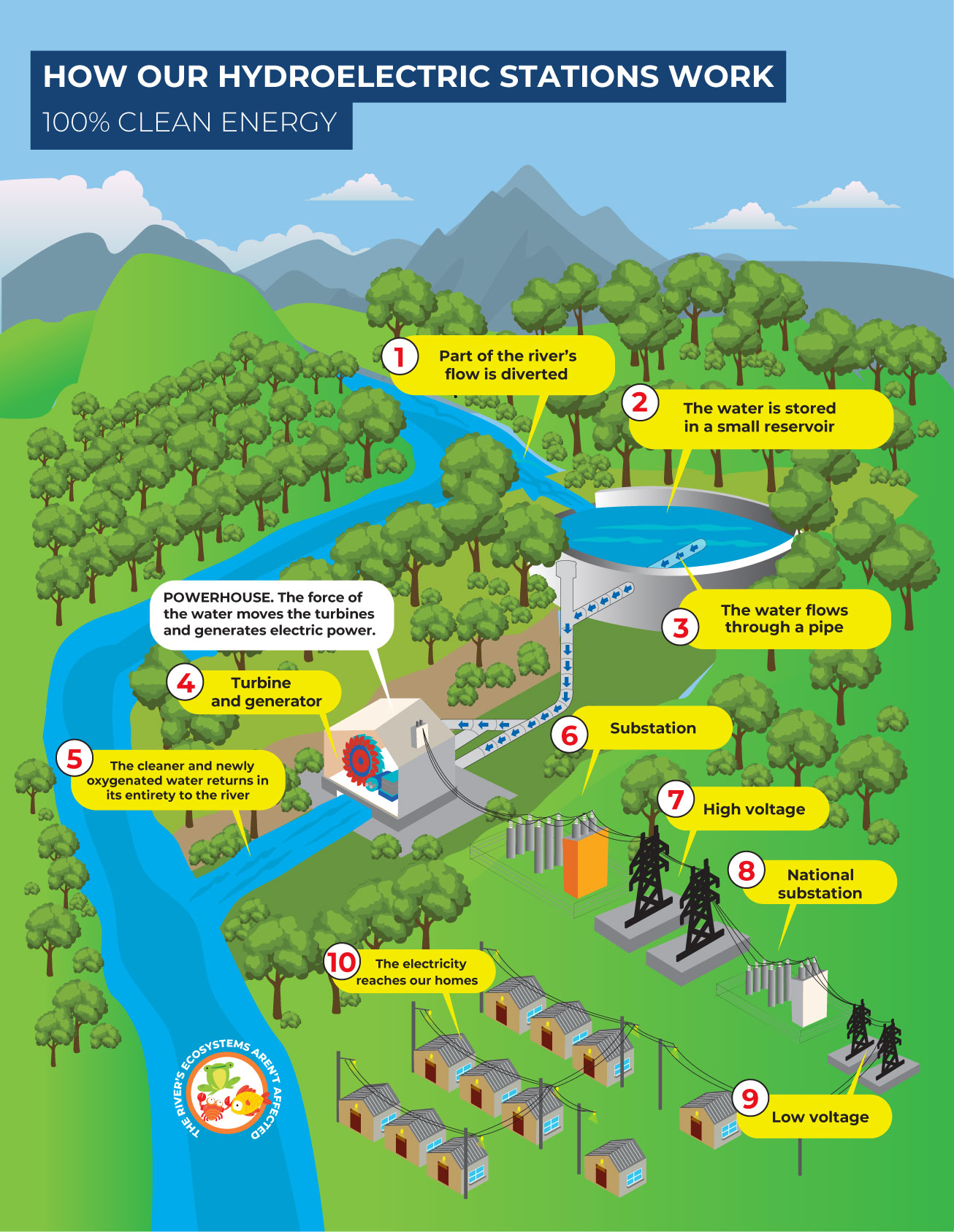 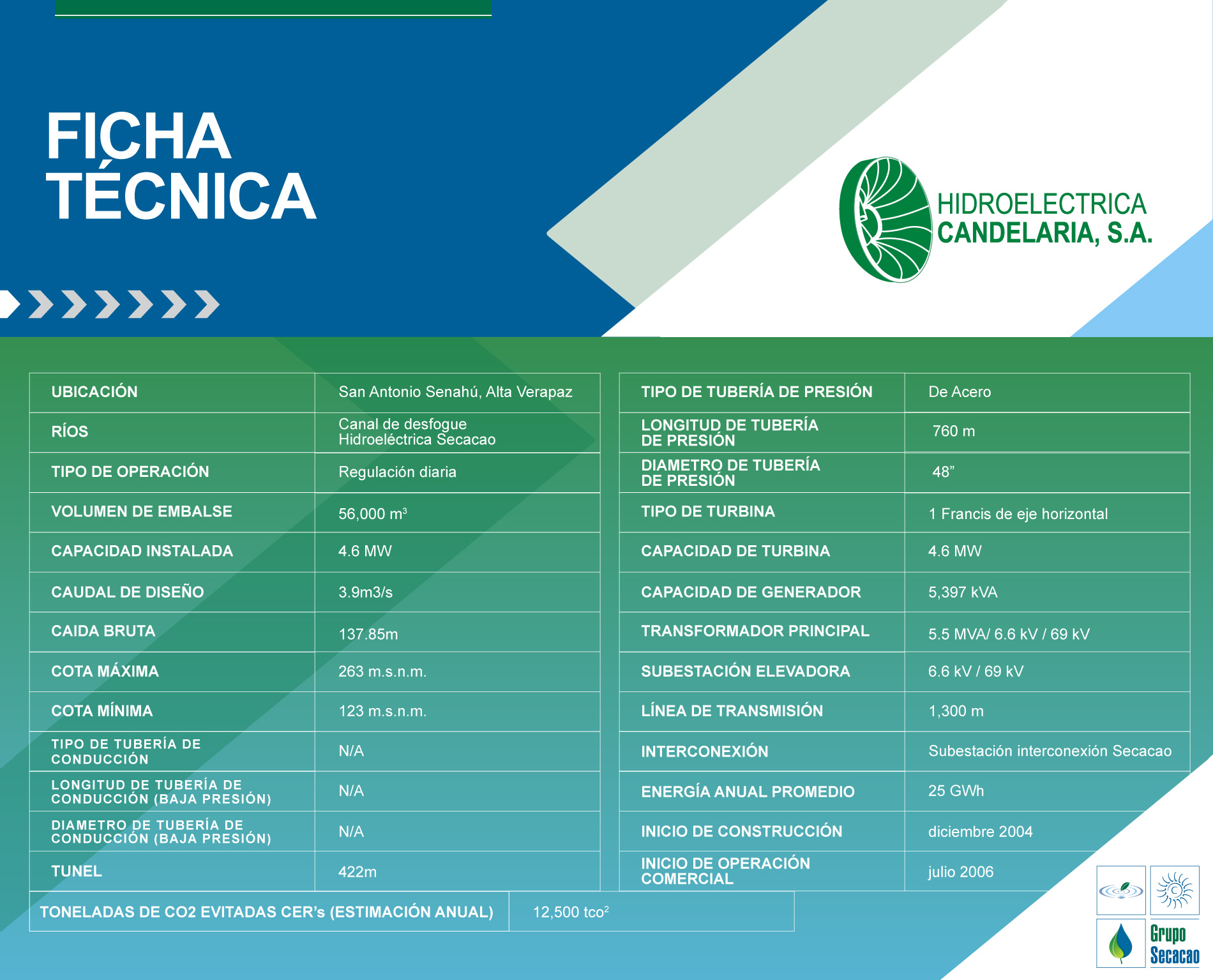 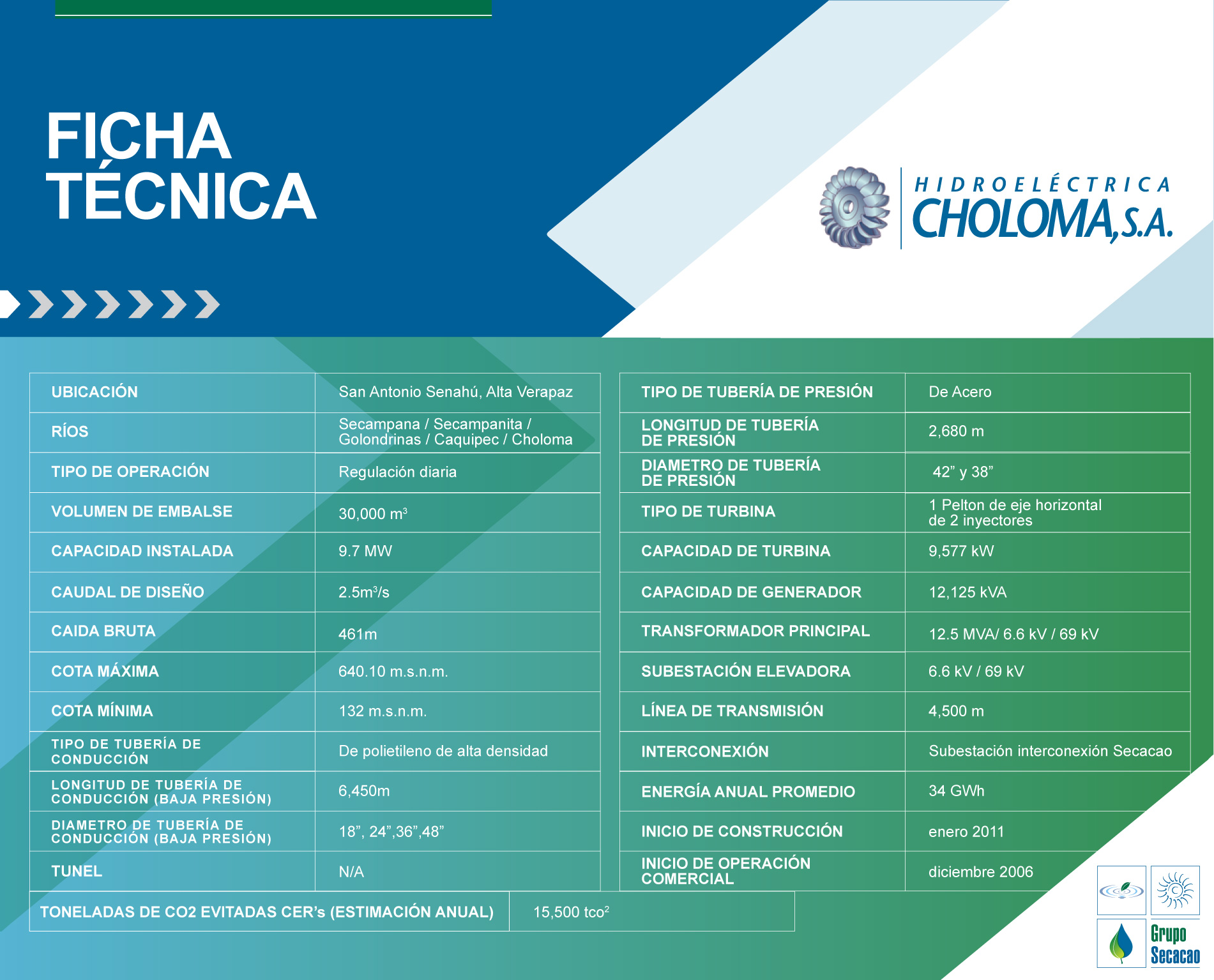 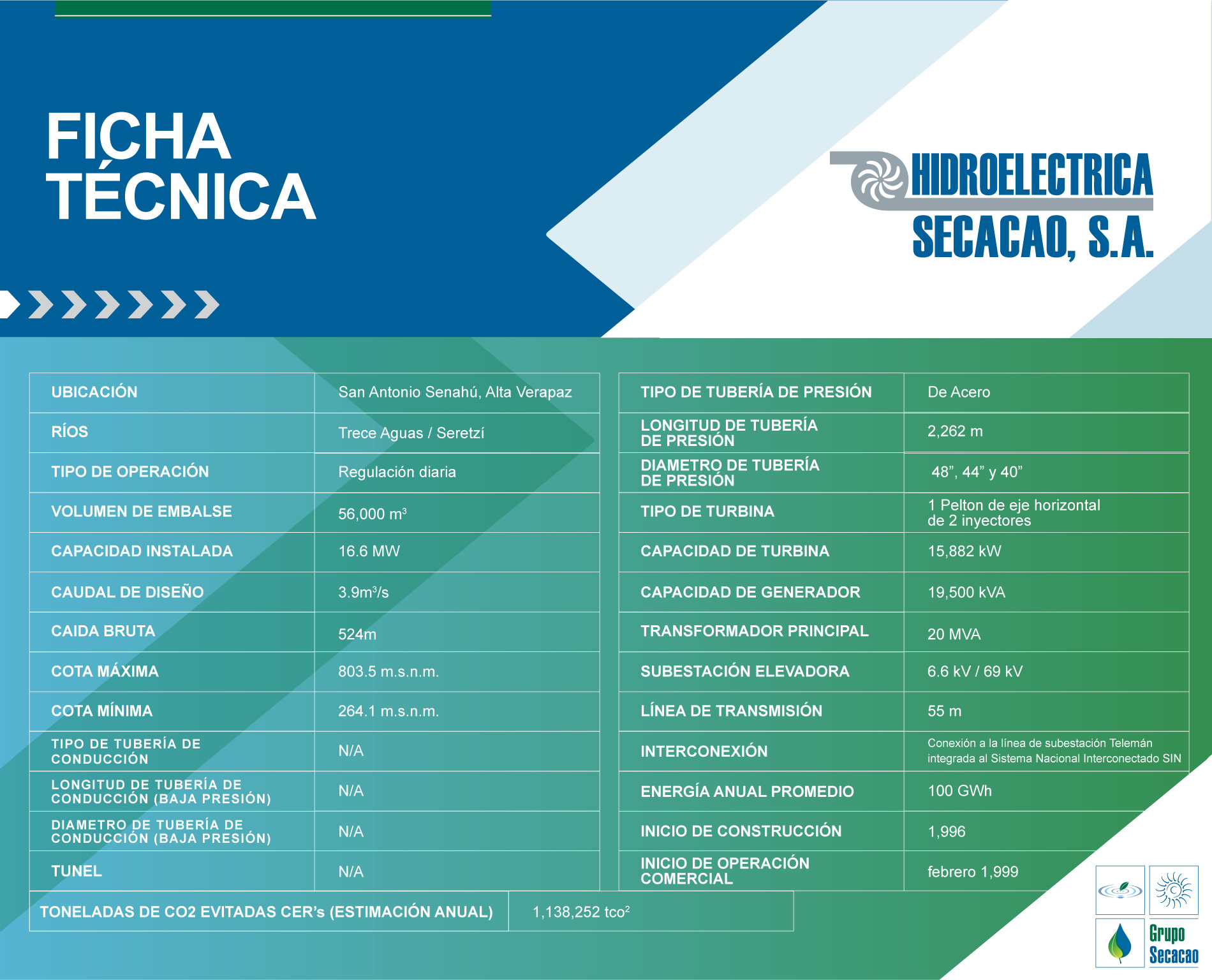